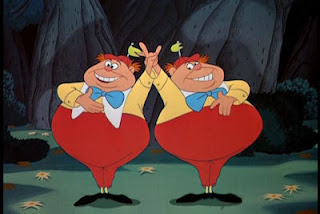 The 1951 editions, from Disney's 'Alice in Wonderland'

So sank the adventurous three,
Those jolly old twins and me,
Tweedledum, Tweedledee and me.

I had some fun writing this poem a year or so ago in a moment of silliness.

I've always enjoyed the Alice in Wonderland story as the epitome of letting the imagination fly and had recently watched the new 3D movie.

I enjoy the beat, and musical nature of this poem as well as it's obvious nonsense nature.


What do you think? Can you think of any other verses? 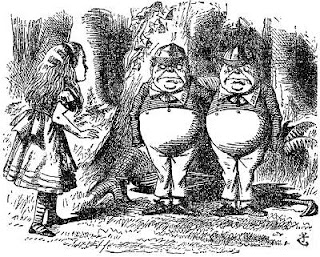 The Tweedledum and Tweedledee characters were inspired by an original 18th century piece from English poet John Byrom:

Just then flew down a monstrous crow,
As black as a tar-barrel;
Which frightened both the heroes so,
They quite forgot their quarrel."

Image from John Tenniel's illustration in Lewis Carroll's 'Through the Looking-Glass and What Alice Found There', originally published 1871.
Posted by DQPoetry at 20:37